We’re excited that you are here and striving to deliver an engaging and meaningful experience to you. Our program will begin at 9 a.m. on Thursday, Jan. 21.

If you have any technical difficulties, please contact us.

A Fireside Chat with Steve Hill: What’s to Come in Tourism 2021? 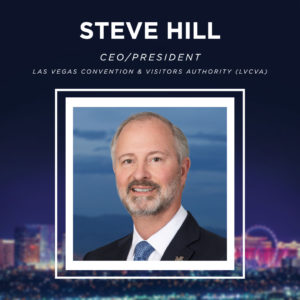 Under Hill’s leadership, the LVCC recently completed construction of its $980 million expansion as well as is nearing completion of the Convention Center Loop, a first-of-its kind underground transportation system in partnership with Elon Musk’s The Boring Company. The convention center expansion adds 1.4 million additional square feet of exhibition and meeting space to the existing campus for a total of 4.6 million square feet throughout the entire facility.

Hill owned Silver State Materials from 1987 until its purchase by CalPortland in 2008 where he served as Senior Vice President until 2011. He was then appointed director of the newly established Governor’s Office of Economic Development (GOED) by Governor Brian Sandoval where during his tenure he lured numerous businesses to the state, including Tesla, Apple, and HyperloopOne. 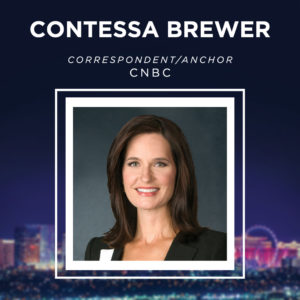 Contessa Brewer is a correspondent and substitute anchor for CNBC appearing throughout Business Day, as well as the network’s 7pm ET newscast “The News with Shepard Smith.”  She covers major news stories for CNBC including presidential elections, hurricanes, the coronavirus pandemic and trade wars.  Her specialty coverage areas are casinos, the gaming industry and the insurance industry.  Brewer joined the network in 2017 and is based at CNBC Global Headquarters. Contessa has covered all aspects of the casino industry, the advance of sports betting, and digital innovation in gaming – as well as economic issues important to Las Vegas and Nevada, including infrastructure, real estate and business development.

A National Emmy-Award winning journalist, Brewer is known for her marathon on-air coverage of breaking news and big political stories. While an anchor for MSNBC, she hosted daily news programs and the long-running, primetime series “Caught on Camera.” As a correspondent, Brewer has contributed reports to CBS News, CBSN, WNBC, NBC News and MSNBC, where she covered a wide range of stories including presidential elections, debt ceilings, government shutdowns, natural disasters, terror attacks and celebrity news. She began her career in Reno, NV followed by Palm Springs, CA and Milwaukee, WI. 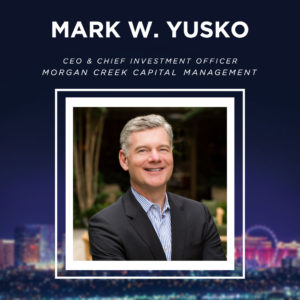 Yusko has been at the forefront of institutional investing throughout his career. An early investor in alternative asset classes at Notre Dame, he brought the Endowment Model of investing to UNC, which contributed to significant performance gains for the Endowment. The Endowment Model is the cornerstone philosophy of Morgan Creek, as is the mandate to Invest in Innovation. Mr. Yusko is again at the forefront of investing through Morgan Creek Digital Assets, which was formed in 2018. Morgan Creek Digital is an early stage investor in blockchain technology, digital currency and digital assets through the firm’s Venture Capital and Digital Asset Index Fund. 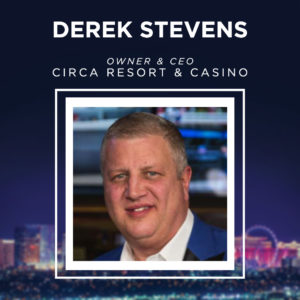 Derek Stevens is the owner and CEO of the D Las Vegas, Golden Gate Hotel & Casino, Downtown Las Vegas Events Center and the soon-to-debut Circa Resort & Casino, the first new integrated resort casino built from the ground up in Downtown Las Vegas in four decades. Circa opened its doors on October 28 and became a fully-integrated on December 28 with the hotel and rooftop lounge
opening.

Stevens has played a pivotal role in the revitalization of Downtown Las Vegas by investing
in the redevelopment of several properties throughout the area and transforming them
into thriving Fremont Street entertainment experiences.

A Detroit native, Stevens received his bachelor’s degree from the University of Michigan and earned an MBA from Wayne State University. Prior to planting his roots in Las Vegas, Stevens had a
desire to make a difference in the gaming and casino industry and wanted to learn more about it
from an operator’s perspective.

Golden Gate – Las Vegas’ original hotel-casino dating back to 1906 – was Stevens’ first investment in Downtown Las Vegas in 2008. Attracted to its storied history, Stevens led Golden Gate through
several major renovations – including the addition of a five-story luxury tower with 16 suites, an
expanded casino floor with a high-limit gaming area, two premium penthouses and extended
outdoor bars. In 2019, Golden Gate welcomed its own sportsbook, Circa Sports.

An avid sports bettor, Stevens fulfilled a lifelong dream of operating his own sports betting venture when he launched Circa Sports in 2019. Led by a team of the finest oddsmakers in the city, Circa Sports brings top-notch customer service to visitors, appealing to betting novices and sharps alike. The first Circa Sports location opened within a new sportsbook at Golden Gate, and
soon arrived at the D. In October, Circa Sports will hang its name on the sportsbook at Circa Resort & Casino. Also in 2020, Circa Sports expanded outside of Nevada with the launch of Circa Sports Colorado. 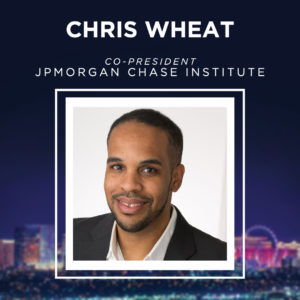 Chris Wheat is the Co-President for the JPMorgan Chase Institute. Prior to joining JPMCI, he served as the Director of Analytics at a financial technology startup, where he led the development of advanced analytics algorithms. He previously was an Assistant Professor at the MIT Sloan School of Management and at the Center for Urban Entrepreneurship and Economic Development at Rutgers Business School. 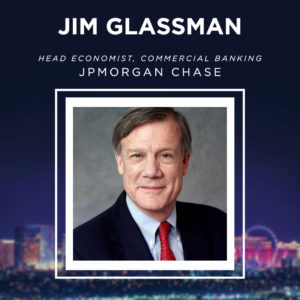 Jim Glassman is the Managing Director and Head Economist for Commercial Banking. From regulations and technology to globalization and consumer habits, Jim’s insights are used by companies and industries to help them better understand the changing economy and its impact on their businesses.

Jim’s work with the firm—combined with his independent research on the principal forces shaping the economy and financial markets—has earned him regular features in the media and as an economic commentator. He is also a long-standing participant in the Federal Reserve Bank of Philadelphia’s Survey of Professional Forecasters and the National Association of Business Economists’ (NABE) panel of macroeconomic forecasters.

From 1979 through 1988, Jim served as a Senior Economist in the Research & Statistics and Monetary Affairs departments at the Federal Reserve Board in Washington, DC. While there, he analyzed and forecasted inflation, labor market developments, the Federal Reserve’s operating strategies and interest rate markets, and he developed monetary and reserves projections. He joined Morgan Guaranty in 1988 and Chemical Bank in 1993, which, through a combination of mergers, became JPMorgan Chase & Co. 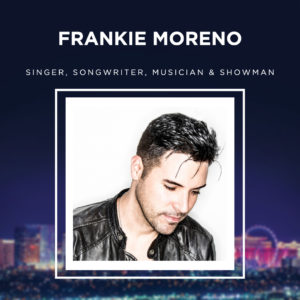 Singer, Songwriter, Musician, and Showman…Frankie Moreno is entertaining audiences from coast to coast with his own brand of genre-blurring Rock ‘n Roll.

Reaching millions of record sales worldwide, Frankie continues to write and release new music consistently. In 2020 alone, Frankie reached the #1 spot on the iTunes charts a record-setting 30 times with new singles, and in 2019, made music history becoming the only Artist to 6 albums reach a Top-10 spot on the Billboard charts in a 12 month period.

As a child prodigy on the piano and a gifted multi-instrumentalist, Frankie was first introduced to audiences at the age of 10 on CBS’ Star Search. His performance on ABC’s Dancing with the Stars again brought him into America’s living rooms with his self-penned hit Tangerine Honey. He has continued to perform sold-out shows from Carnegie Hall to The Kennedy Center, and The Hollywood Bowl to Las Vegas residencies.

As a touring Artist, Frankie has traveled internationally with Sugarland, Billy Currington, and wrote Air Supply’s #8 Billboard Top-40 hit Dance With Me while touring as their Musical Director. In 2018, Frankie created a Symphony concert where he has performed his original music with the nation’s premier orchestras.

Frankie Moreno commands audiences around the world with his highly contagious music and playful stage antics. His songs are cleverly crafted and his musicianship virtuoso. He is unquestionably a unique Artist and all around talent who puts his heart and soul into his music. 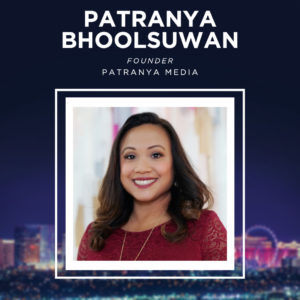 A three-time Emmy Award winning journalist, Patranya Bhoolsuwan has two decades of experience as a news reporter and anchor working in major news markets across the country. Her work has appeared in local and national networks including CBS, CNN, and CNN Headlines News.

Patranya is also currently a visiting lecturer teaching journalism at UNLV and Nevada State College. She and her husband love to travel and eat their way around the world, including in her native country of Thailand. 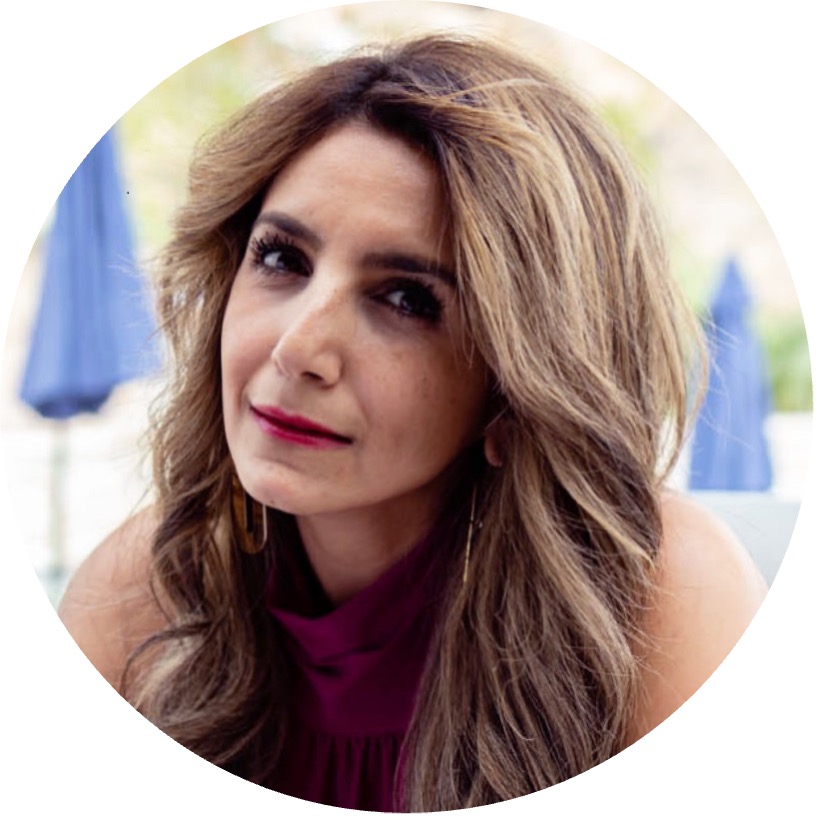 Rise Up For You

Nada Lena Nasserdeen is the founder and CEO of Rise Up For You, #1 Best Selling Author, and 2x TEDx Motivational Speaker.  She can be seen and heard stages around the world and recently was featured on Canada's Global TV, Radio Canada, Amazon Prime TV, and Bloomberg TV. Rise Up For You, a company that enhances company culture and leadership through soft skills is featured worldwide and has worked with brands such as CBS, Google Next 19, LA Fitness, and various Fortune 500 companies and small businesses with a reach in over 50 countries. They’re Certified as a Women's Owned Small Business and Certified by the Society of Human Resources Management.
Visit Website 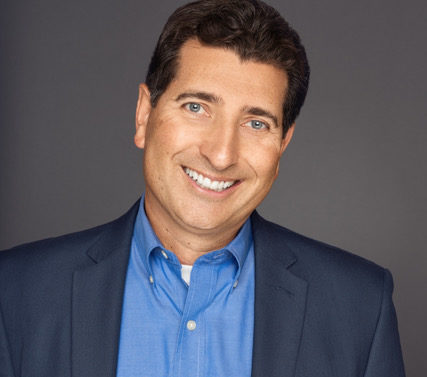 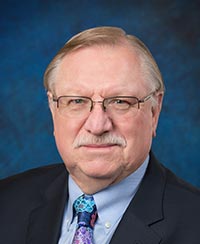